After the event called “the blip” where everyone came back from “the snap” where Thanos erased half of the population of the Universe, Peter Parker (Tom Holland) decided he has had enough for a while. He´s suffered from Tony´s death and the stress that comes with carrying his legacy is killing him. That´s why he decides to go on a school trip to Europe with only one goal: confess his feelings to his classmate MJ (Zendaya) and having a good time with friends. However, Nick Fury has very different plans for him. A new force with the name of  The Elementals are threatening this World and with The Avengers gone, he´s the only one capable of stopping them. This news, bring unease to Peter. Not only because he has to ditch his vacation plans but what about his friends? This could put them in danger too. People are asking him to be the new Iron Man but, is he good enough? Can he live up to Tony´s legacy?

This movie is quite different from “Homecoming”. The same name tells you so, the first one gives you a sense of home. You can feel the thrill of Peter with his new powers, the innocence and how he wants to be something greater. Meanwhile, in “Far From Home” even though they do keep the classic comedy that all Spider-Man movies carry, you can feel the Post Endgame World. We don´t longer have a Peter who´s enthusiastic about being a hero but rather afraid of it. He´s not longer innocent, he has seen how cruel people can be and overall, Peter is no longer trying to please and impress his mentor, now, he´s trying to survive without and live up to him. In this movie, we can see clearly that this is a new start for Marvel. Although I had my doubts, I consider that this movie is perfect to kick off the new MCU phase.

Regarding the plot, I think it was pretty interesting and entertaining. It fills some doubts that Endgame left us and is full of action. However, the big plot-twist of the movie was pretty obvious for me or at least, I suspected all along. One of the things I loved the most about the plot, is that it transcurred not only in New York but in many places of Europe that contained lovely sceneries from Venice to Prague, epic battles in London that blew my head off. Also, the soundtrack was awesome, modern and catchy songs to light up the mood when necessary. 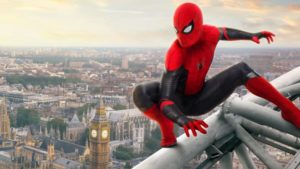 If you haven´t watched the movie yet, don´t leave the cinema as soon as the film ends! Because there´s not one but two post-credit scenes: the first, that is in between the ending and the credits, shows us some bad news for Peter Parker that will be developed in Sider Man 3 and in the second one, that is at the very end of the credits, we can see the shocking plot-twist that we were all waiting for that left us rather confused. That´s Marvel´s way to do it.

1.731
Condividi su
About Malena 148 Articles
Hi everyone! My name is Malena. I can be defined as a lively and adventurous girl who’s always looking foward to a new experience. I’m very passionate about reading and writing. I will write in English so those who don’t speak Italian can also enjoy the blog