Riverdale High will once again step on stage and sing in their new musical that will be based on the 1980´film “Heathers” and this time everyone is singing.

“Last year, we had a blast doing ‘Carrie.’ This year, we wanted to honor another iconic teen movie. ‘Heathers: The Musical’ is BIG FUN, with great roles for the Riverdale kids,”

Executive producer Roberto Aguirre-Sacasa said in an statement, last year, in their previous musical episode, they had a huge success. 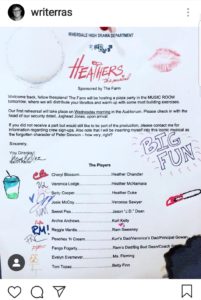 Here´s the official cast list for the play. Jughead, will be the musical´s head of security which is necessary because, last year someone was murdered in the musical. Kevin, will be as always, director and producer however, he will also act this time.

The paper, also says that the musical is sponsored by the farm. Will Betty will be onboard either ways? Or she just joins the musical to investigate the farm and the Evernever family? I guess we´lll have to wait…

In case you never watched the movie, Heathers is about Veronica Sawyer, that forms part of the “popular” group at school with three other girls named Heather, meets a mystery guy named Jason “J.D.” Dean and starts questioning herself if the price of being popular is just to high and there are somethings that are not worth it.

1.164
Condividi su
About Malena 143 Articles
Hi everyone! My name is Malena. I can be defined as a lively and adventurous girl who’s always looking foward to a new experience. I’m very passionate about reading and writing. I will write in English so those who don’t speak Italian can also enjoy the blog