After three seasons of being Clary Fairchild in the show “Shadowhunters: The Mortal Instruments” that sadly was canceled earlier this year by the chain Freeform due to financial issues. Even though, neither Kat, the rest of the cast or the fans are done fighting  with the hashtag #notourlasthunt #saveshadowhunters #pickupshadowhuters , McNamara already got a new recurring role on the DC series “Arrow” that its currently airing their seventh season. 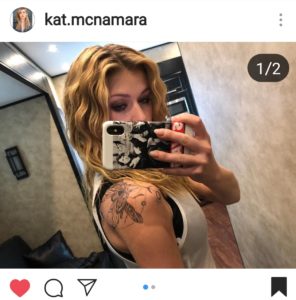 This is one of the first pictures of Maya that Kat posted in her Instagram.

Kat will be playing Maya, a street fighter and thief of Star City. There´s also an unofficial saying that this character is linked to Buffy the vampire slayer. We don´t know yet if she´ll be on the wrong or right side of our favorite vigilante The Green Arrow (Stephen Amell) that´s freshly out of jail and with tons of asses to hit.

When McNamara was asked about her new role on Arrow she just limited to say:

“Maya is kick-ass,” “She’s a fighter. She’s someone not to be messed with, I’ll put it that way.”

And, respecting the Arrow cast and crew she said:

“It’s been a real joy,” she said. “The Arrow team is such a family and I was welcomed with open arms and it’s such an exciting thing.”

While we wait for McNamara´s debut on Arrow, we can still enjoy its seventh season that airs Mondays on the CW.

Also, remember to save the date because “Shadowhunters” will be back on Monday, February the 25th with the last episodes of season 3b.

WE ARE NOT DONE FIGHTING

1.486
Condividi su
About Malena 140 Articles
Hi everyone! My name is Malena. I can be defined as a lively and adventurous girl who’s always looking foward to a new experience. I’m very passionate about reading and writing. I will write in English so those who don’t speak Italian can also enjoy the blog